The T-28 Trojan will never be a considered a beautiful aircraft like sleek piston powered fighters such as the Mustang and Spitfire. The aircraft was initially created as a two seat trainer for the US Air Force with the first aircraft flying in 1949. The aircraft had a short production run with the last new T-28 delivered in 1958.

The original A model had a miserly 800 horsepower, 7 cylinder radial engine and a two bladed prop. The Navy became interested in the aircraft and ordered 491 B models which had the considerably more powerful 1425 horsepower Wright Cyclone R-1820-86 9 cylinder engine. The C model followed a few years later and this was modified with a tail hook for carrier operation. A shorter prop was installed on the C to prevent prop strike. Some of the original A models were modified with a larger engine and became the D model. These D models saw combat in various regions around the world.

This aircraft is based upon the T-28D “Huff ‘n’ Puff” from Warbird Aviation at Archerfield http://www.warbirdaviation.com.au

The T-28 is available as two packages. The initial package was for the T-28D only. The second package is for the T-28B and T-28C (the Navy versions).

T-28A DONATIONWARE and DEMO VERSION
This aircraft is released as donationware. If you enjoy the aircraft then why not make a donation to www.sim-outhouse.com to help this website to cover their costs? It is recommended that anyone interested in buying the T-28B/C package or the T-28D package download the T-28A to see how well it performs on their system.

DIFFERENCES BETWEEN T-28A, T-28D and T-28B/C
If you require more power (1425hp vs 800hp) than the T-28A then Ant’s Airplanes sells two T-28 packages, the original T-28D package and the T-28B/C package. You can buy one or both of these packages. The following is a list of the main differences between the T-28A/B/C and D:
- B/C and D has 1425 hp engine vs 800hp in the A model
- B/C and D have 3 bladed prop vs 2 bladed in A model
- B/C and D have a lower profile canopy
- B/C and D have 6 weapon stations vs 2 in the A model
- B/C and D available as payware only vs A available as donationware
- B/C has a different panel layout with the location of many instruments changed
- B/C has a different attitude indicator, airspeed, manifold pressure and engine rpm gauges
- B/C has different cockpit and gauge lighting
- B/C has different switch panel and exterior lighting system
- B/C have a speed brake
- C model has a tailhook for carrier operations
- B/C has US Navy and Marines repaints, the D has Air Force, Fennec and COIN repaints, the A has US Air Force repaints

VERSION 3.30
- Adds Physics Based Rendering model and textures for P3D v5 and above (PBR models are not compatible with P3D v4.4 or v4.5 due to the virtual cockpit light textures not being compatible)
- Installer for P3D v5
- Higher resolution virtual cockpit lighting. This uses nearly 500MB more RAM but modern computers should be able to handle it now (system RAM of 8GB is recommended). Original low res panel.cfg files are included in the panel folder.
- Adds additional key commands for aircraft controls
- Improved carrier operation for T28C. Supports catapult launch in FSX Acceleration and P3D (although the real plane wouldn't have been launched with a catapult).
- General bug fixes and improved error handling


The Trojan is a considerably detailed aircraft and therefore places a large load on your computer. I can only recommend that you download the T28A version to test the performance of the T-28 on your sytem. The T-28A includes the Solo and Attack versions only but it will give a very good  indication of how well the T-28B/C and T-28D versions will work on your system. 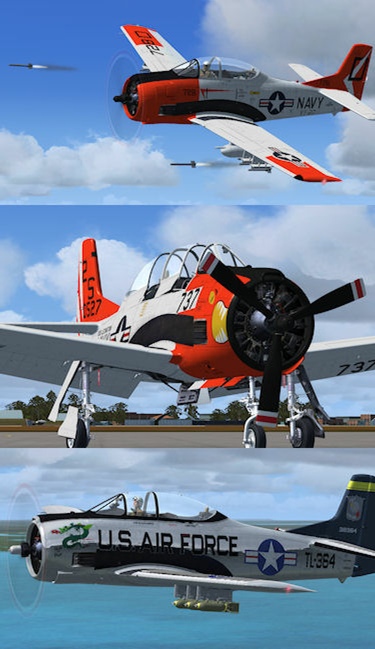 SCREENSHOTS AND VIDEOS
All screenshots are high resolution (largest is 1920 pixels wide) and unedited except for cropping. Screenshots will open in a new browser window. First batch of screenshots feature the T-28D. Scroll down for T-28B/C screenshots. To best see what the T28 looks like in your own system why not download the T28A version? It’s free to use and fully featured.