The Winjeel is a two-three seat, low wing, fixed undercarriage tail dragger. Construction is all metal with fabric covered control surfaces. Power is provided by a 450hp Pratt & Whitney Wasp Junior nine cylinder radial engine driving a two bladed Hamilton Standard variable pitch propeller.
The Winjeel was the Royal Australian Air Force's primary piston trainer from 1955 to 1975. The Winjeel replaced the Tiger Moth and Wackett aircraft and was itself replaced by the NZAI CT-4 Airtrainer.
During the Vietnam war America's use of Forward Air Control (FAC) aircraft had proved to be a great asset so in 1969 four Winjeel's were modified for use in this role by the addition of a smoke grenade dispenser and upgraded communications equipment. FAC Winjeel's were not used in combat but were used in training. Finally in 1994 the FAC Winjeel's were replaced by Pilatus PC-9 turboprops which brought an end to the Winjeel's nearly 40 years of service.
A total of 62 Winjeels were produced from 1954 to 1958 and delivered to the RAAF. 2 prototype aircraft (CAC-22) were produced in 1951 and required extensive testing and modifications to arrive at the final design of the Winjeel.
Original plans called for the prototypes to be fitted with Pratt & Whitney Wasps and CAC's own engine design in the production aircraft. This engine was a seven cylinder radial called the R-795 Cicada. In 1951 the Cicada program was scrapped and Winjeels were all fitted with Pratt & Whitney Wasp Junior engines (the same engine used in De Havilland Beavers).
Interestingly, for a trainer, the Winjeels had three seats. Both the RAF and RAAF had specified three seats for their post WWII trainers. The theory being it would be possible to train two pilots at once, one being instructed whilst the other watched. This theory did not last long.
According to the Australian civil aircraft register there are 30 Winjeels currently registered. This FSX version is based on VH-OPJ (serial no A85-429 ) which is operated by Classic Aero Adventure Flights in Ballina NSW (http://www.classicaero.com.au). This particular aircraft has been modified to fit an additional seat to make it a four seater aircraft.
There are two basic variants supplied. The original trainer aircraft and the FAC version. Each variant comes in two versions, a modern version and a vintage version. The modern versions contain modern avionics and some gauge upgrades while the vintage versions uses original avionics and instrumentation.


FEATURES
- There are two basic models, Normal and Forward Air Control (FAC). Each model comes in vintage and modern versions which makes a total of four variations: Modern, Vintage, FAC Modern and FAC Vintage.
- Highly detailed model. Fully modelled aircraft including the engine and the unique engine bay petals. The Winjeel has over 320,000 triangles however new coding techniques keeps the framerates as high as possible.
- Animation Manager (shift+3) controls not only animations and preferences but also contains interactive checklists, full pilot's handbook and tutorial.
- In game help. Middle mouse click on any item to open the Animation Manager to the correct page with a full explanation of that control.
- Camera control. Adjust the default eyepoint within the game using the Animation Manager. Note: This function should not be used if you are using EZ-DOK or some other camera utility.
- Interactive checklists display red when any item needs attention. In addition clicking on the camera icon next to each item will move the camera to that item (this is not compatible with ezdok camera utility, disable ezdok to use the camera icons in the Winjeel). You can also set the Winjeel to highlight the mouse zone(s) for each item to aid in learning the aircraft controls.
- Exterior inspection. Using the interactive checklists you can take a virtual tour of the exterior of the aircraft. You can place chocks, remove protective covers and even add fuel and oil by directly clicking on the aircraft itself.
- Three pilots are available, vintage male RAAF pilot and modern male and female.
- Custom sound system. The Winjeel bypasses the default FSX sound system. This allows the engine sounds to more accurately simulate changes to manifold pressure and engine RPM which is impossible to achieve with the FSX sound system. While the custom sounds do provide better control of the engine sounds the disadvantage is that the sounds do not respond to eyepoint position. The Winjeel can be set to use the default sound system if the user requires or prefers.
- Automatic mixture control. The mixture control has four settings only, Idle/Cutoff, Auto Lean, Auto Rich and Full Rich. When set to Auto Lean or Auto Rich the mixture is automatically adjusted to provide the best air fuel mixture ratio.
- Enhanced flight dynamics. Custom coding provides enhancements beyond the capabilities of the standard FSX flight dynamics. These include realistic prop torque effect, wing drop at stall, better spin characteristics, elevator lift due to prop wash, more controllable taxiing speed as well as a free castoring or steerable tail wheel.
- Steerable or free castoring tailwheel. The Winjeel tailwheel has a switchable tailwheel locking mechanism that allows the tailwheel to be steerable (for take-off and landing) or fully free castoring (for parking). If you don't like tail draggers in FSX because they are hard to control on the ground then try the demo of the Winjeel and it may change your mind.
- Smoke grenade dispenser. FAC models include a smoke grenade dispenser and armament panel. Smoke grenades can be launched to mark strategic targets and they work in multiplayer too.
- Carburettor icing modelling. The Winjeel will model the effects of carburettor icing dependent upon temperature, humidity. This is different and in addition to the impact icing that FSX seems to model.
- Engine damage and wear modelling. Four settings of engine realism are available:
OFF - no engine damage or wear beyond normal FSX behaviour. Use this setting for simple, no worries flying.
PERF ONLY - abnormal engine temperatures and pressures will affect the performance of the aircraft only.
PERF + ICE - as above but carburettor icing is modelled.
FULL - as above but records engine wear. This can lead to engine failure if the aircraft is mistreated.
- Custom fuel consumption coding provides accurate fuel consumption rates.
- Engine autostart routine. Press the FSX auto start key command and the Winjeel will automatically step through the pre-start and start procedures.
- Failures modelling. You can set programmed failures to test your emergency procedures skills.
- Controller calibration. The Winjeel uses custom coding to control the throttle and mixture controls. You can use the control calibration page of the animation manager to setup your controller. With the throttle you can set the indent position (set for 33 inches MAP at sea level) and with the mixture you can set the range of each zone for IDLE CUTOFF, AUTO LEAN, AUTO RICH and FULL RICH.
- In game weight and fuel loading. Use the Animation Manager to adjust the fuel, oil level and weights of the aircraft directly in game without needing to use the FSX menus. Centre of gravity will be automatically calculated for you.
- Rain effects. Like most aircraft from Ant's Airplanes the Winjeel includes canopy rain effects. This includes working windscreen wipers.
- Canopy window transparency. Easily adjust the level of transparency of the canopy windows directly in game.
- Structural icing effects appear on the canopy windows and wing, tail and elevator leading edges.
- Demo version available. A demo of the vintage FAC model is available. The airspeed, altimeter and vertical speed indicators and engine wear modeling are inoperative in the demo. The demo includes the smoke grenade model so for multiplayer use all players can download the free demo to view smoke grenade deployments.


INSTALLATION
Either download the demo or the full version after purchasing from one of the retailers above. The retailer should send you a download link and a registration code. Run the installer program. You will be able to choose which version to install. Mostly, the version is obvious but due to the way Dovetail games stores the game location in the registry for FSX:Steam Edition it could make things more complicated.

FSX:Steam Edition dual install
For Flight Simulator X:Steam Edition if you also have FSX installed on your system. Also use this option if the FSX version could not locate the correct directory.

Prepar3D v4.4+ (PBR) inside program folder
To install inside the SimObjects folder of Prepar3D v4.4 or higher. This version uses PBR model and textures. 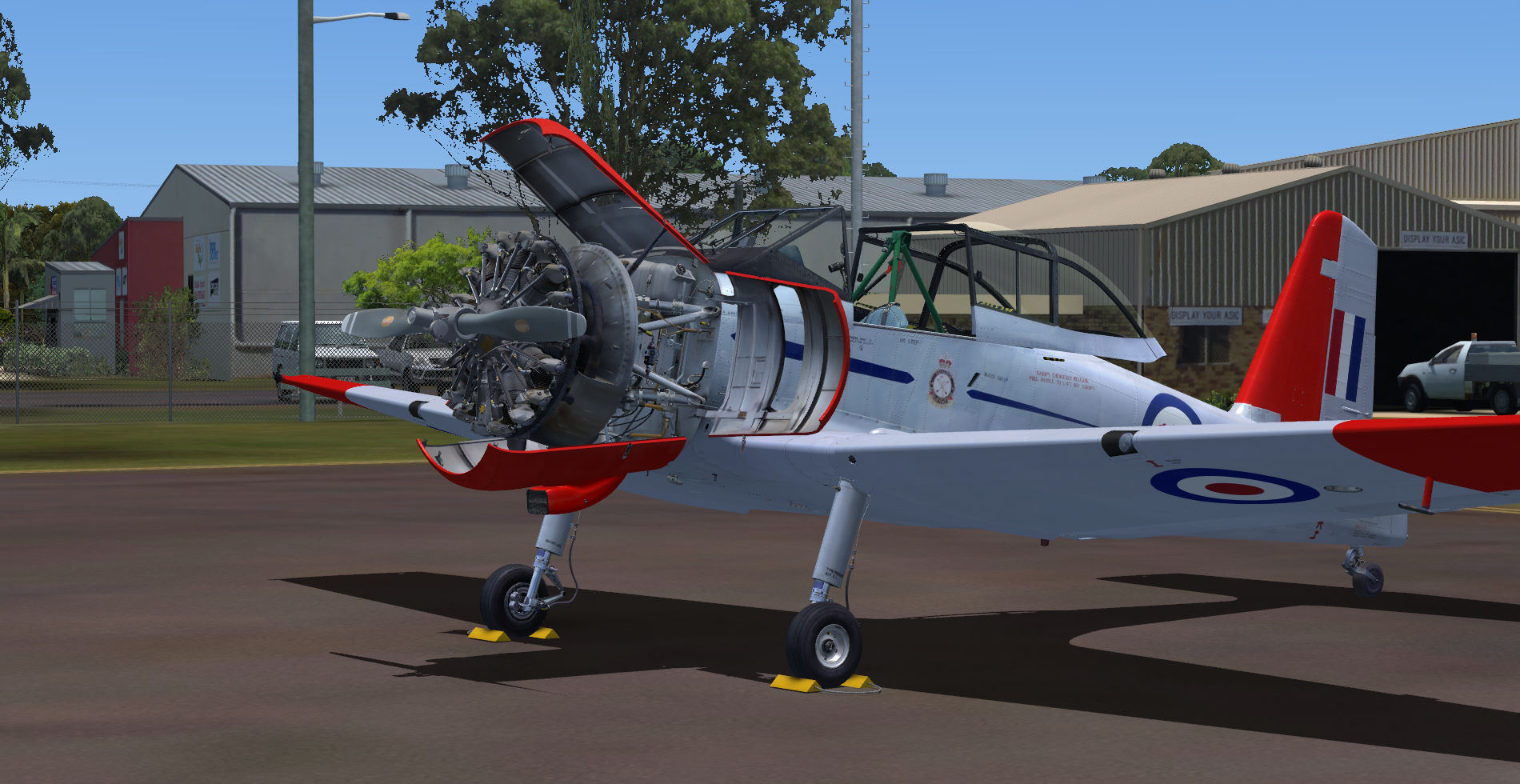 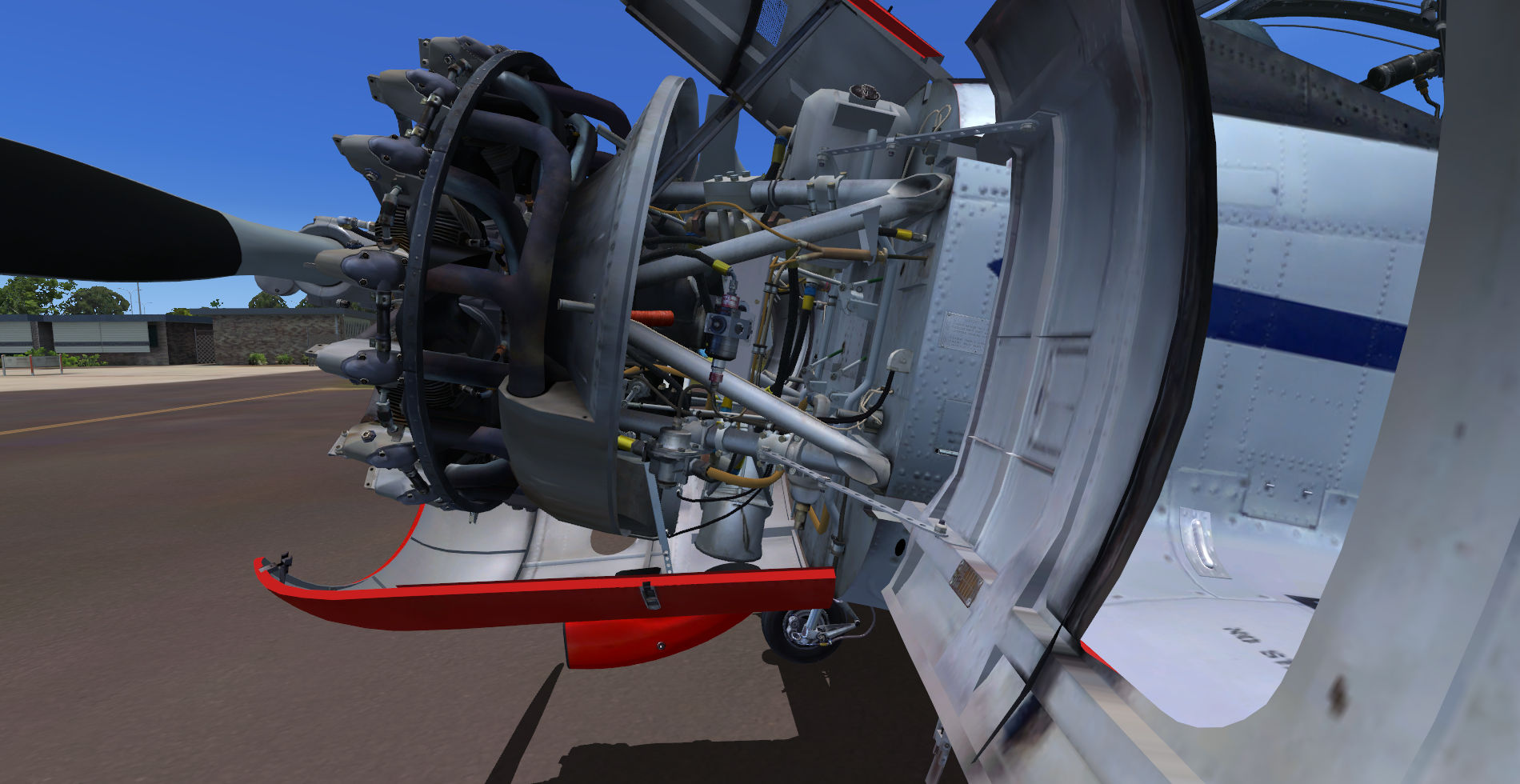 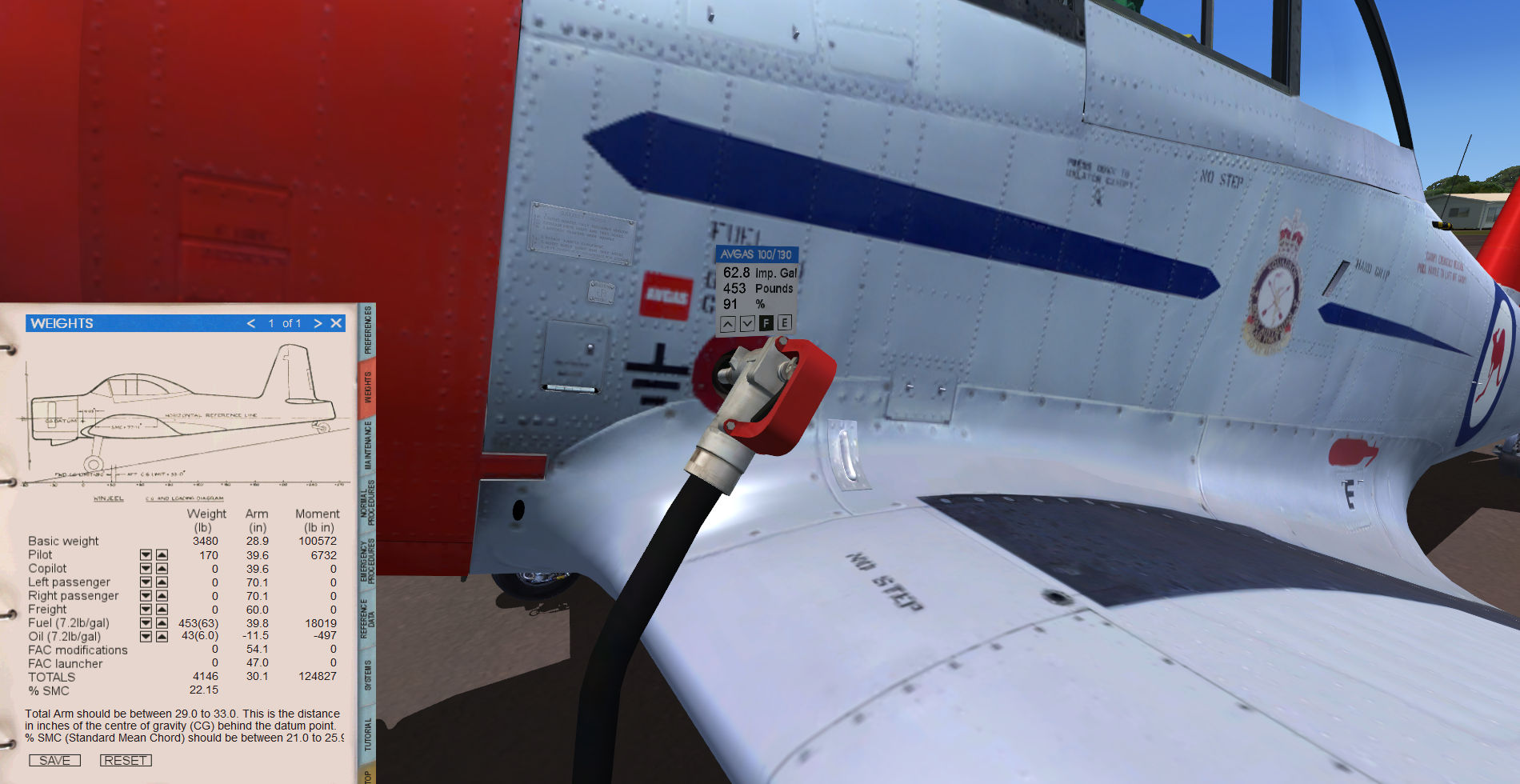 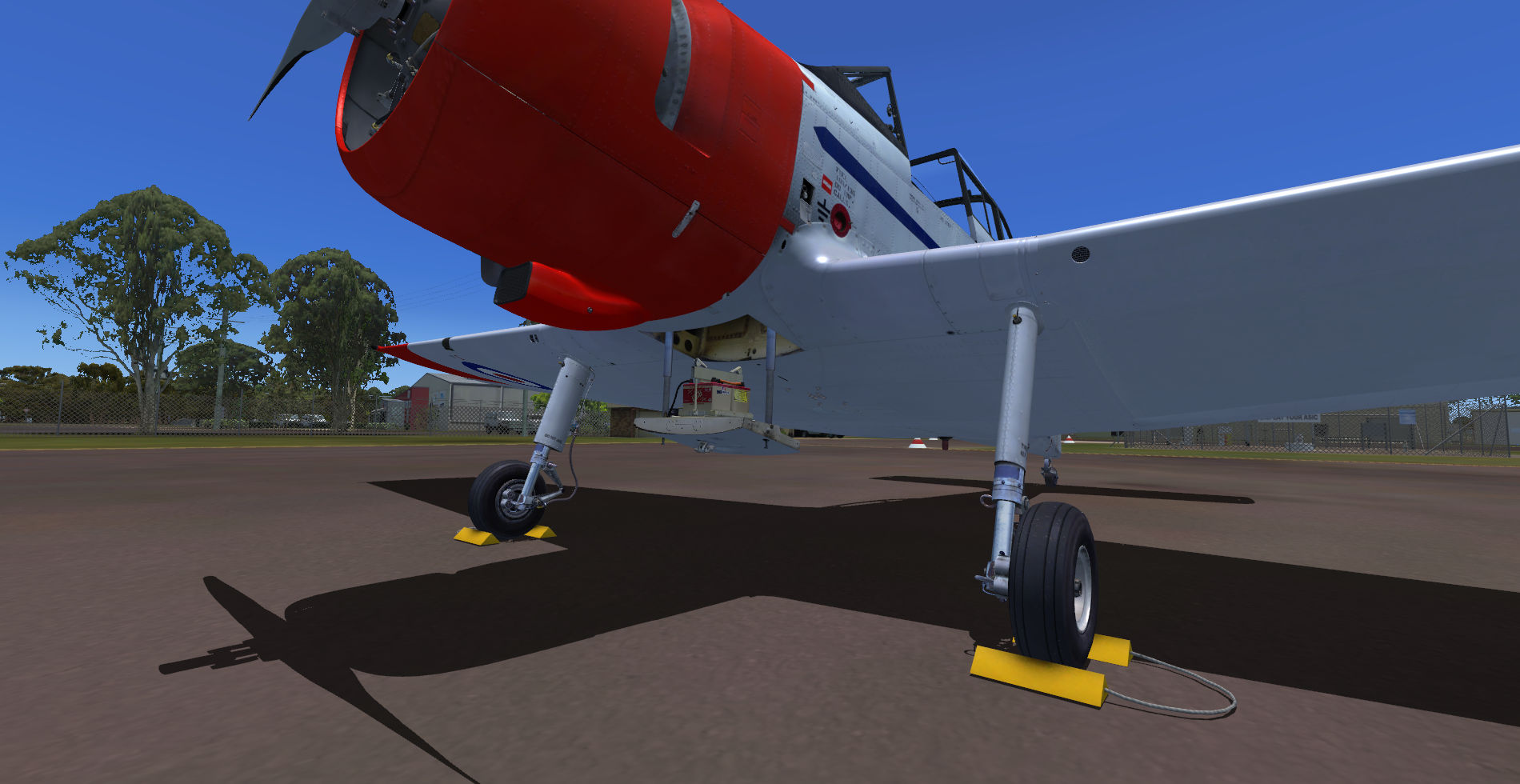 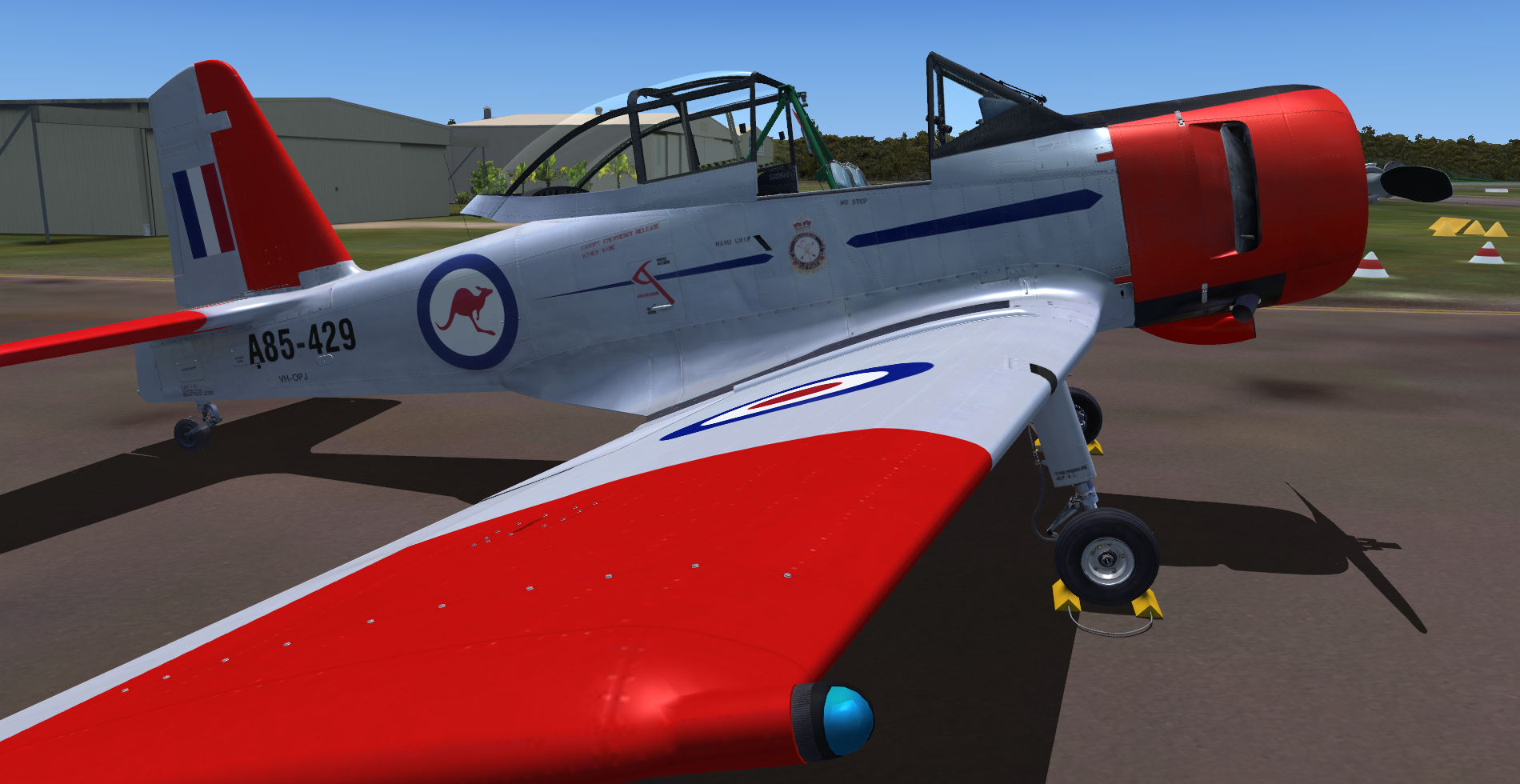 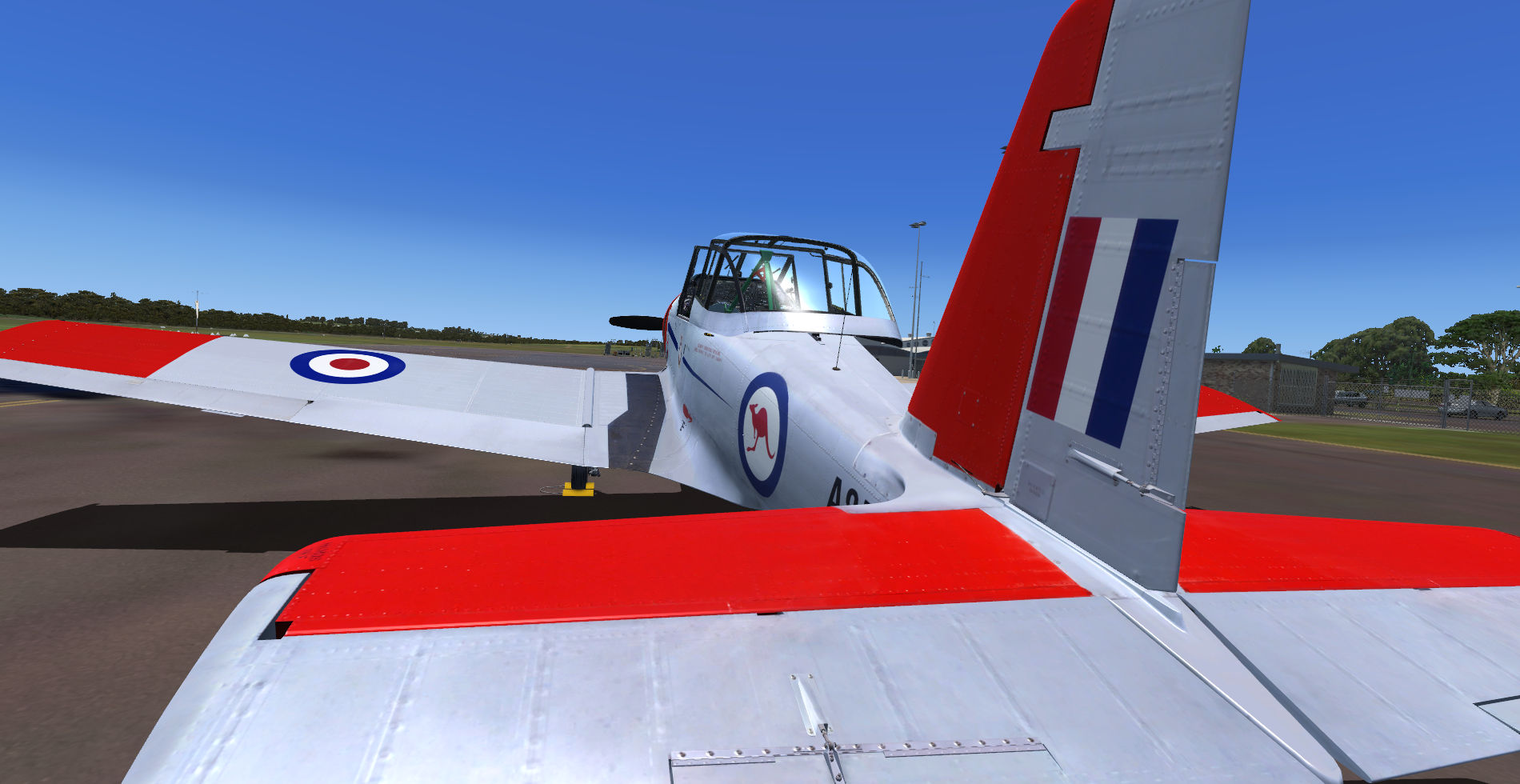 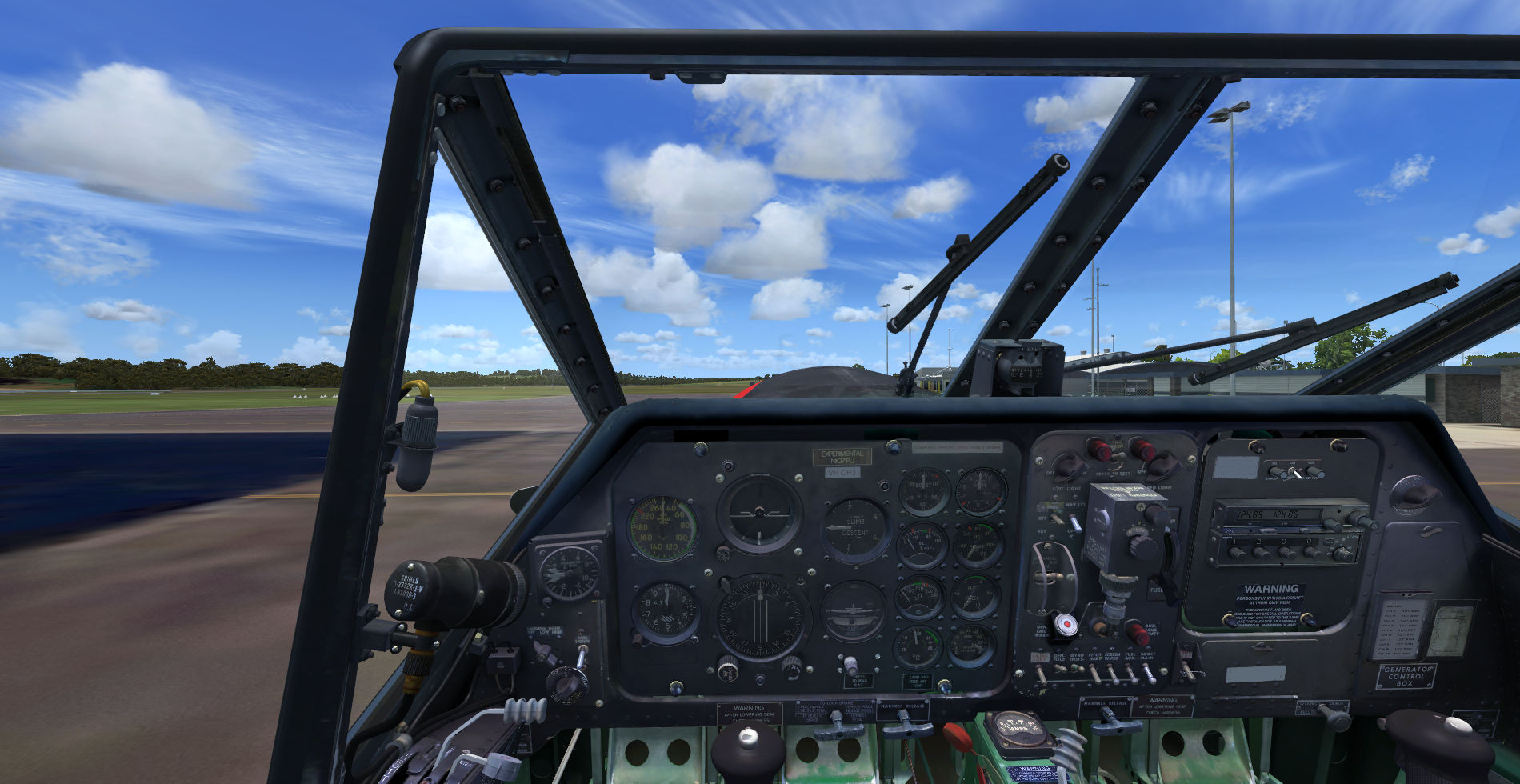 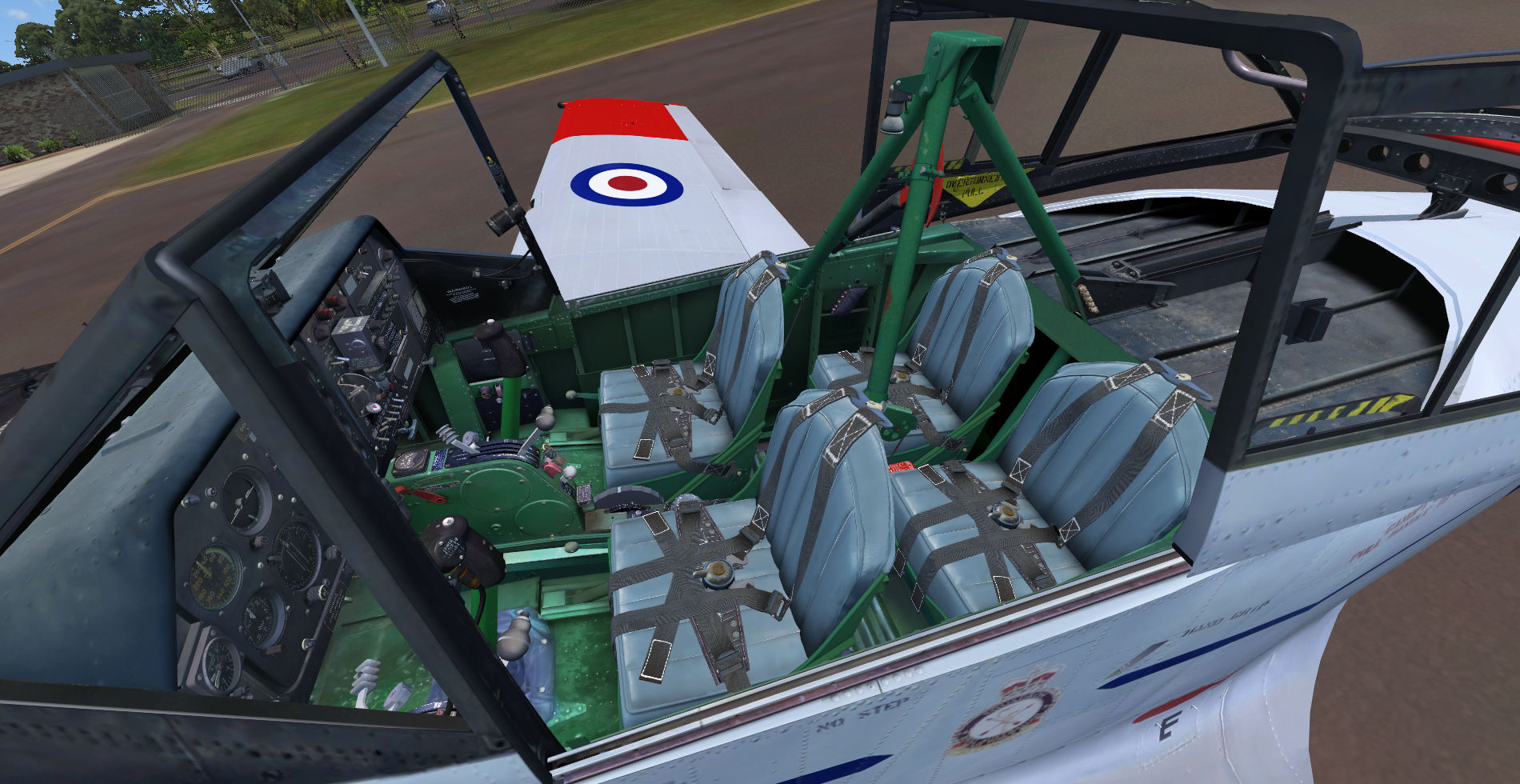 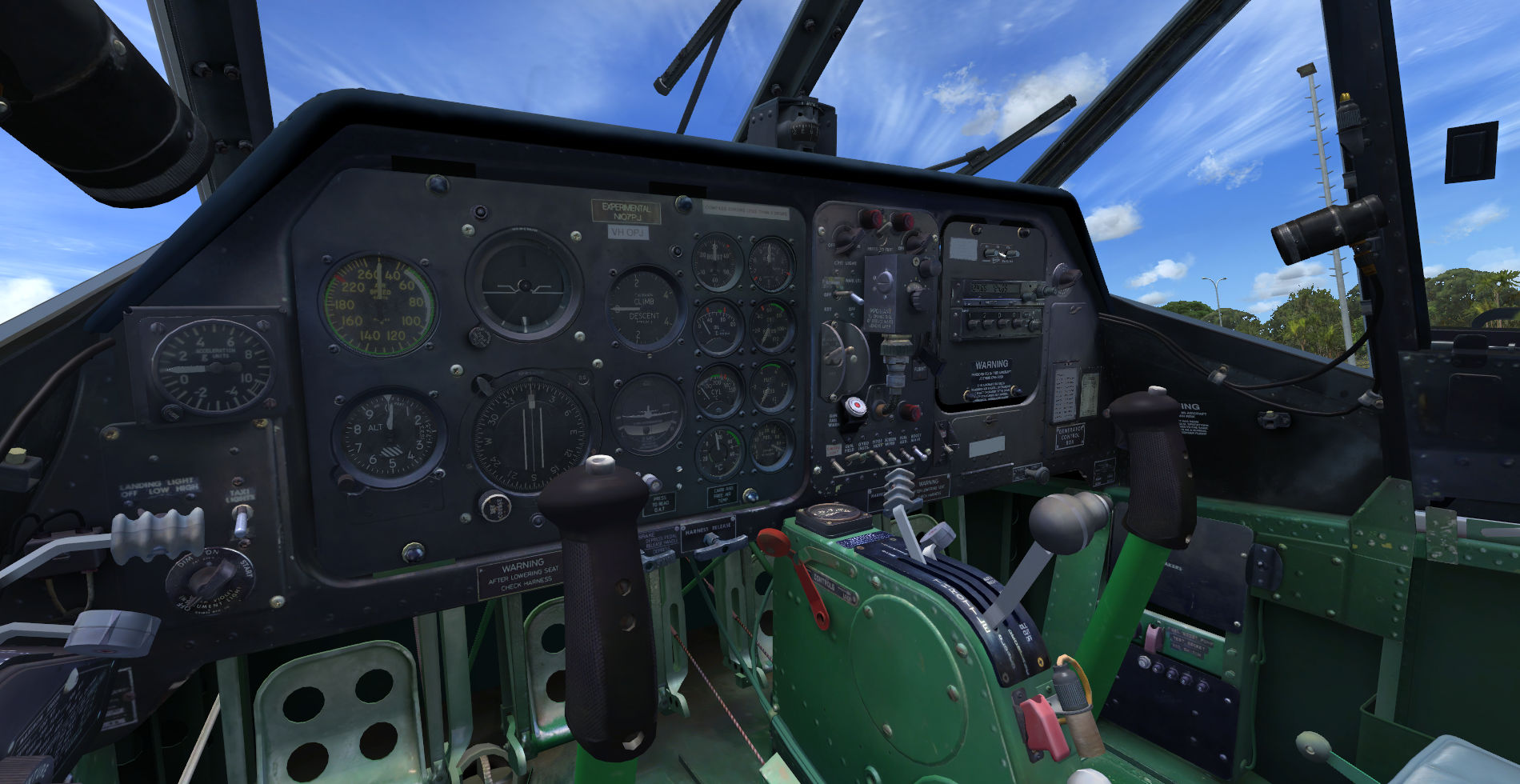 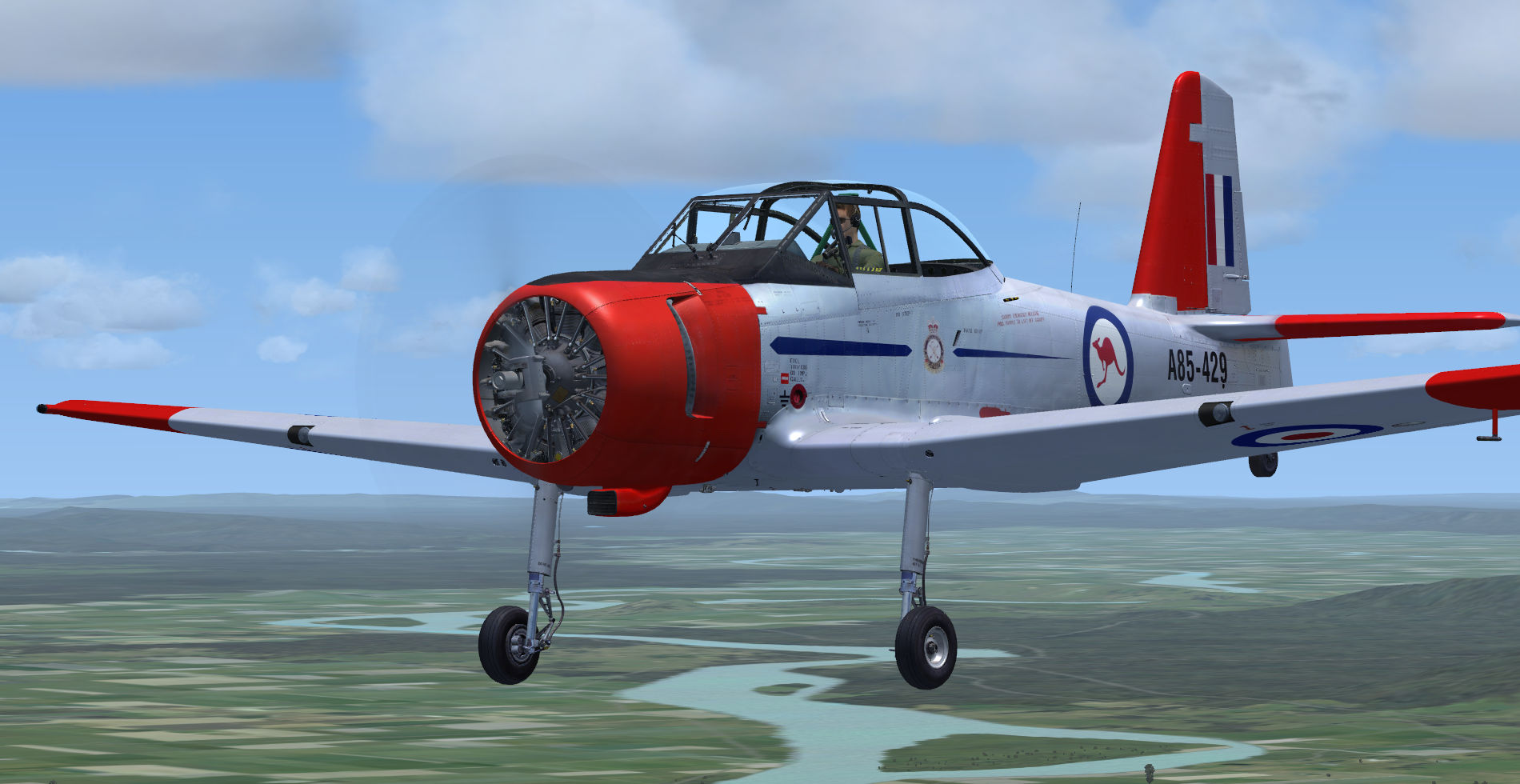 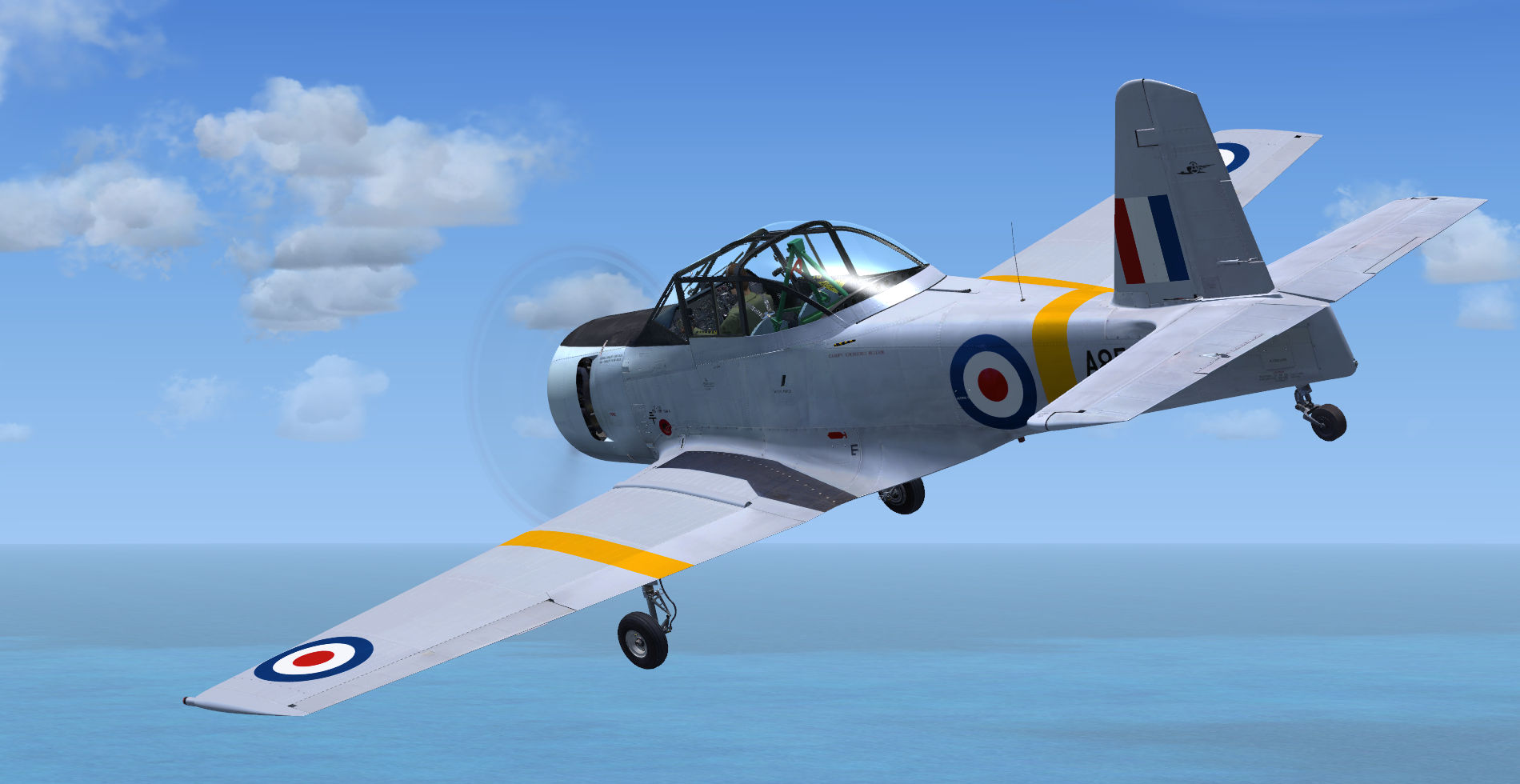 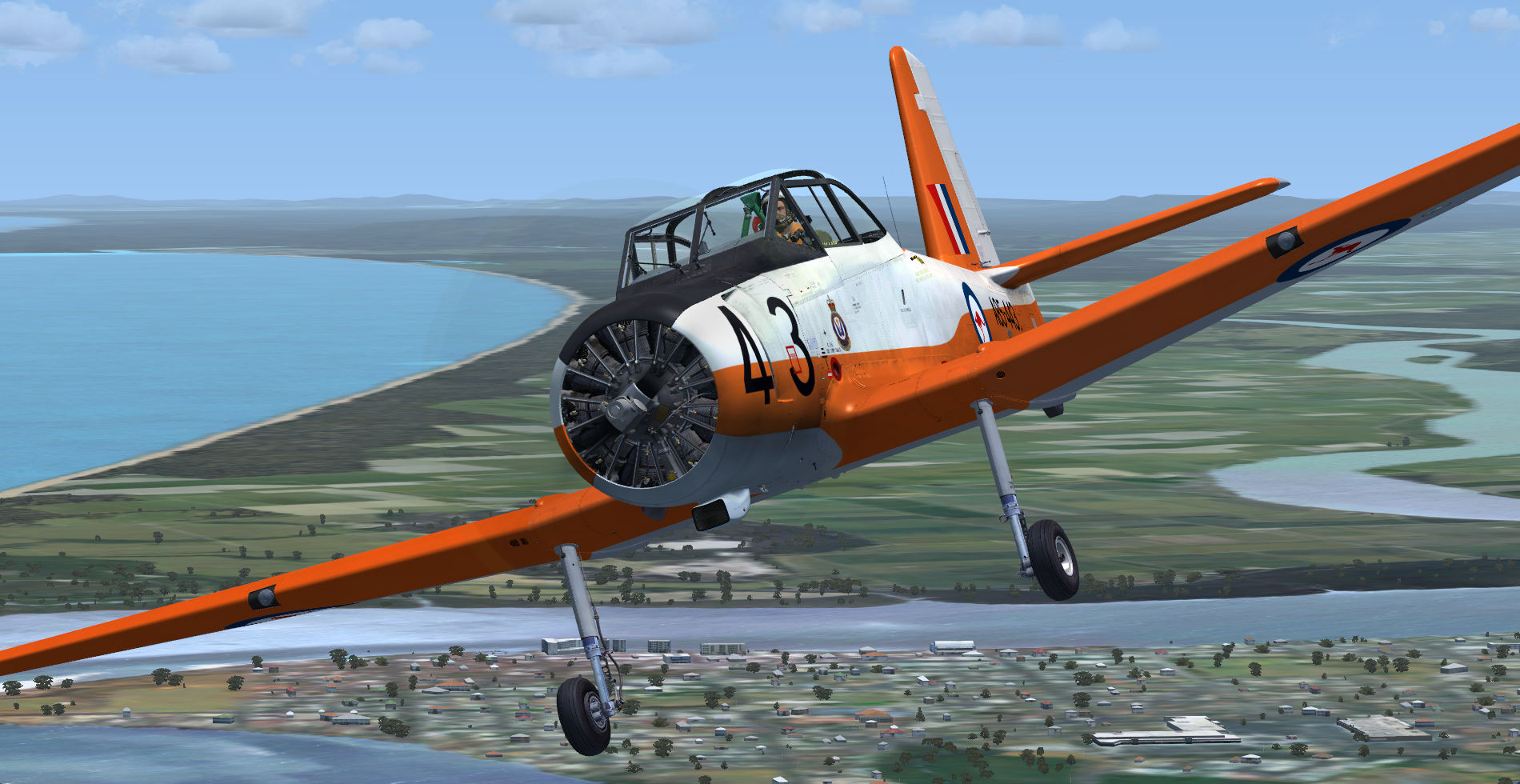 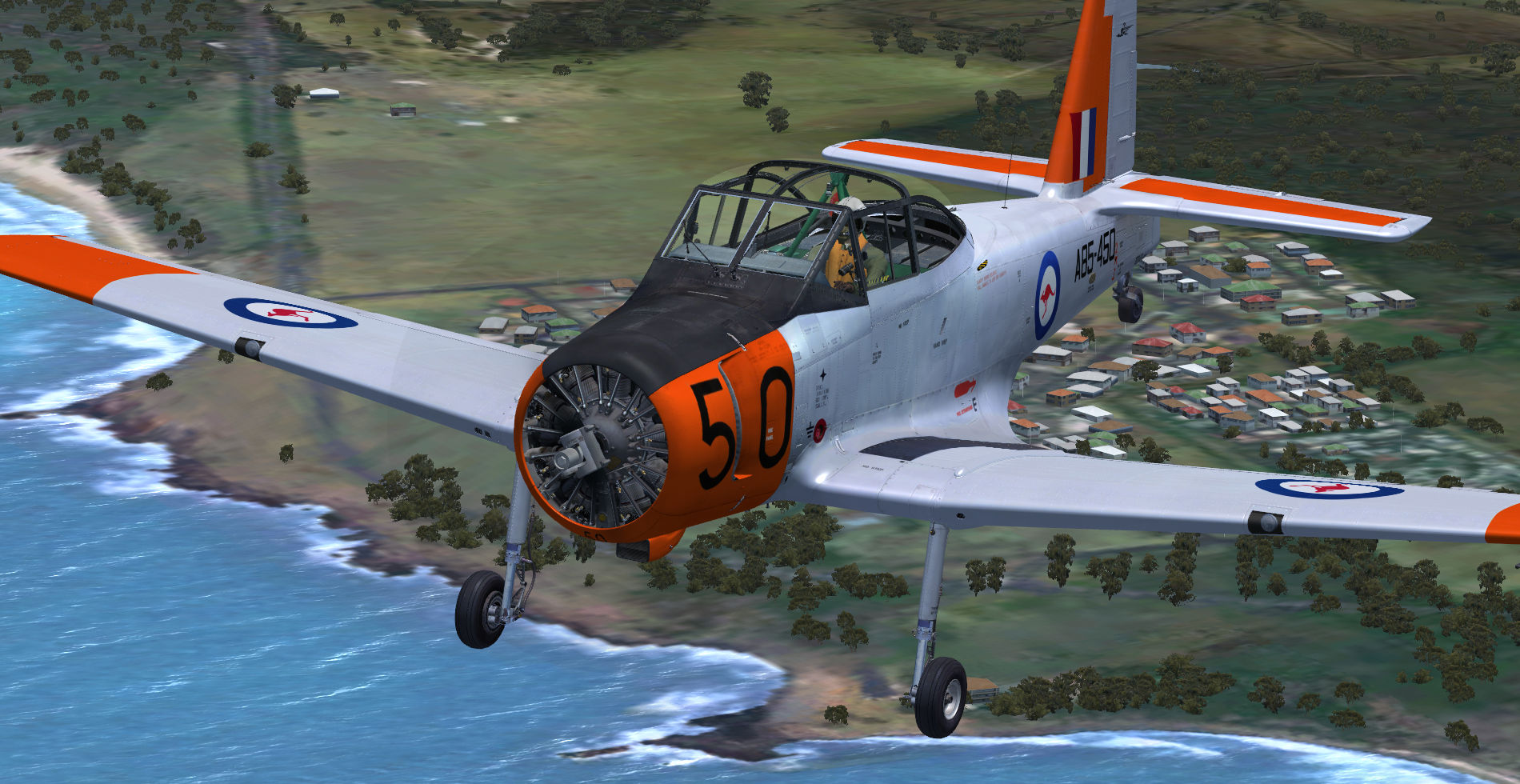 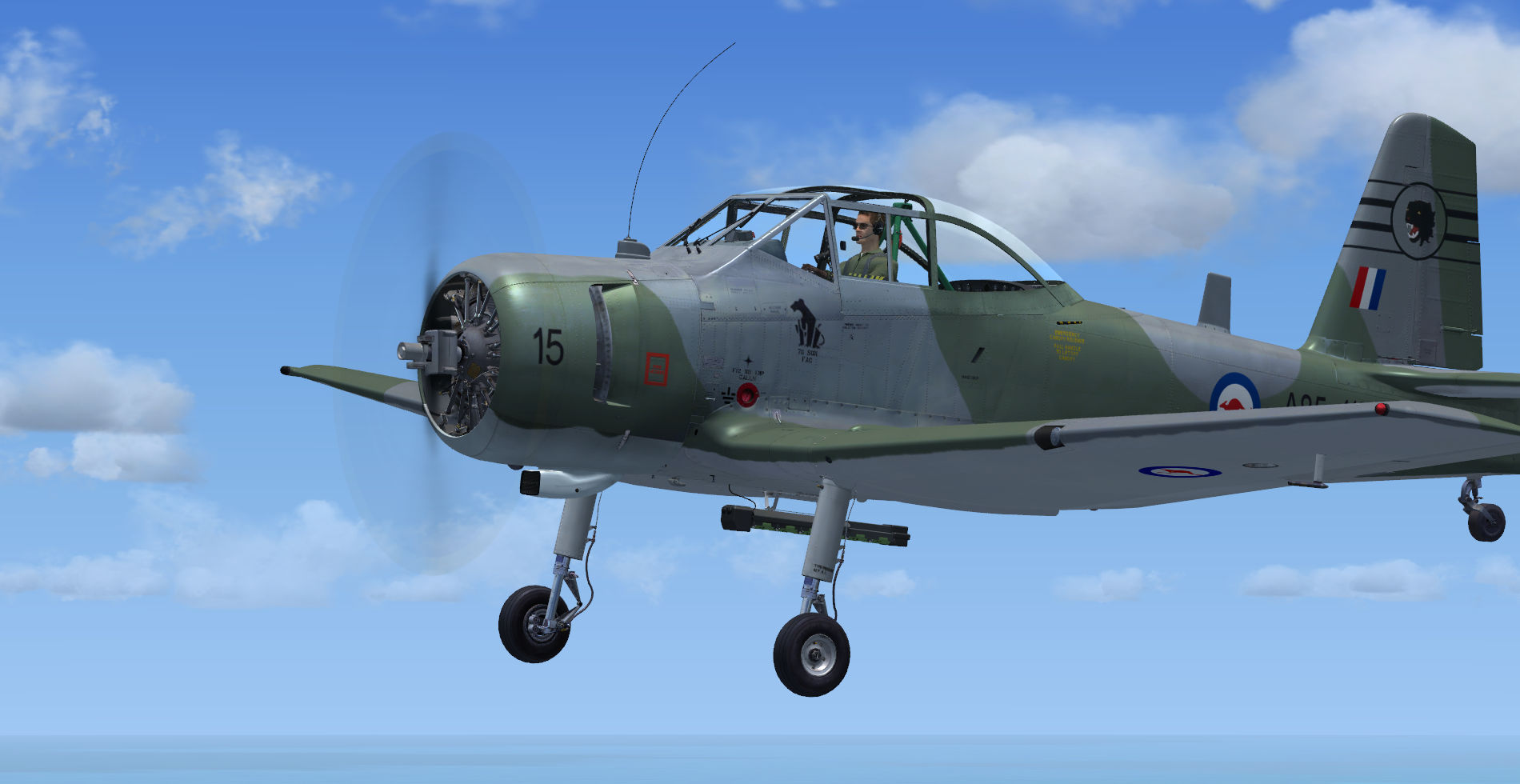 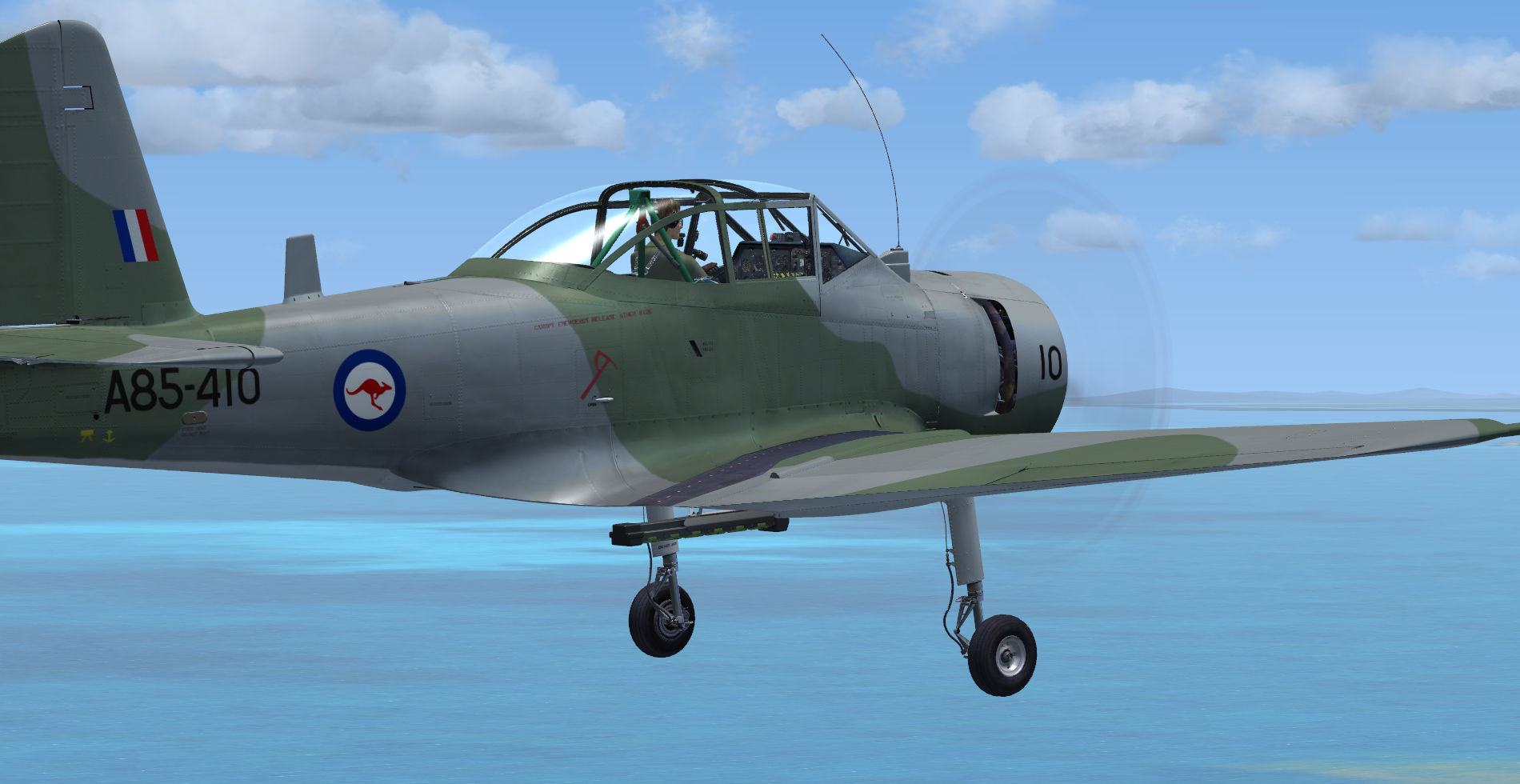 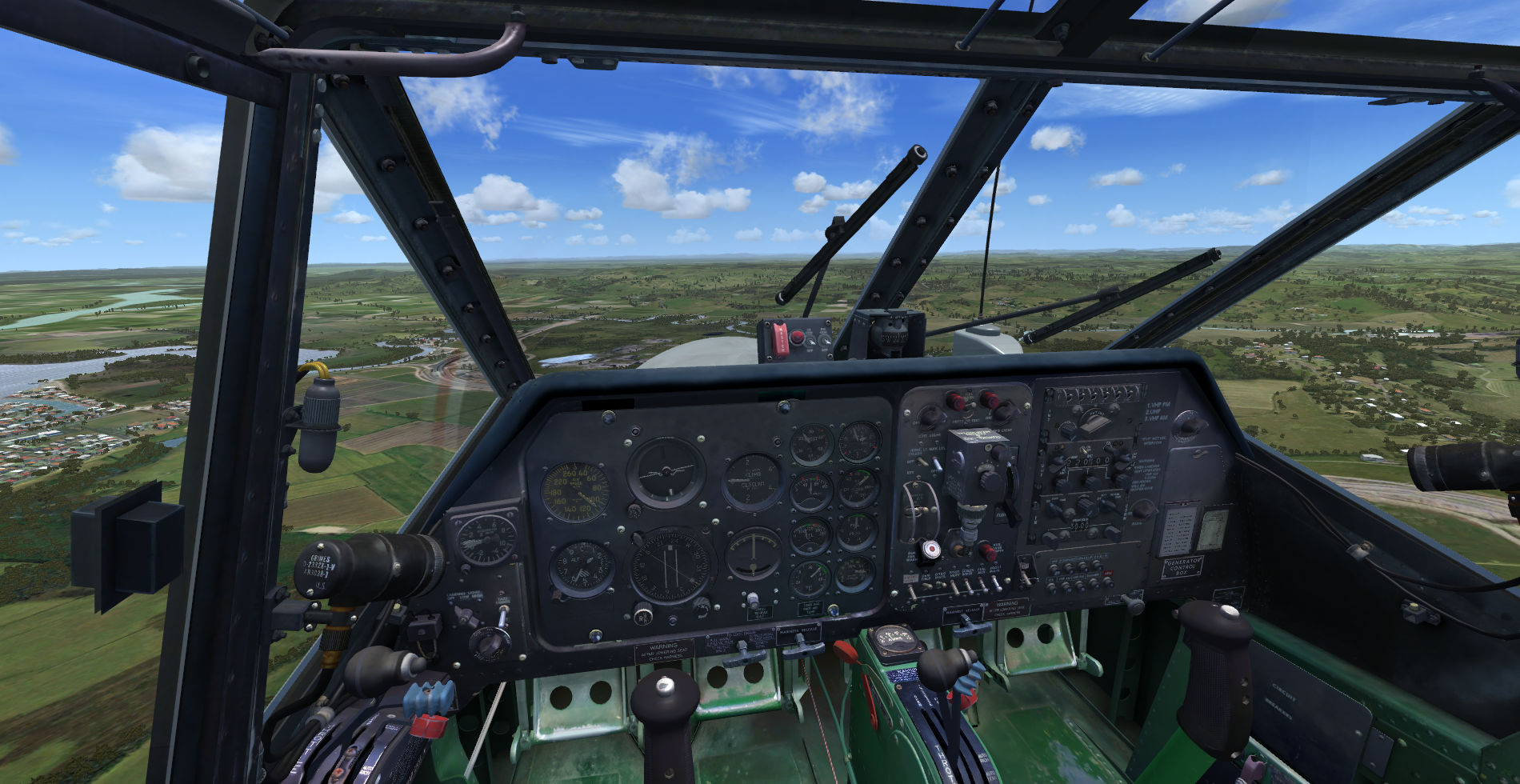 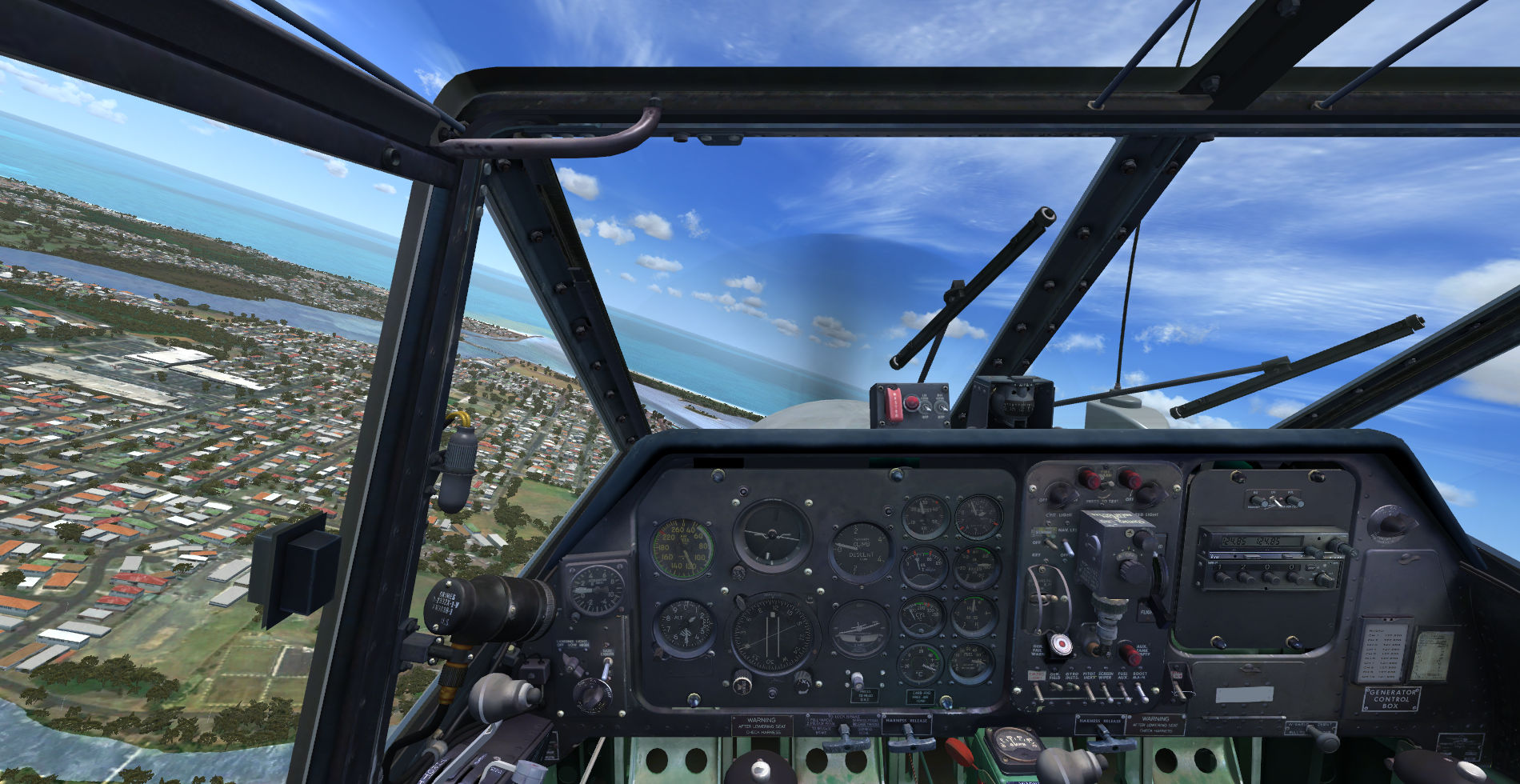 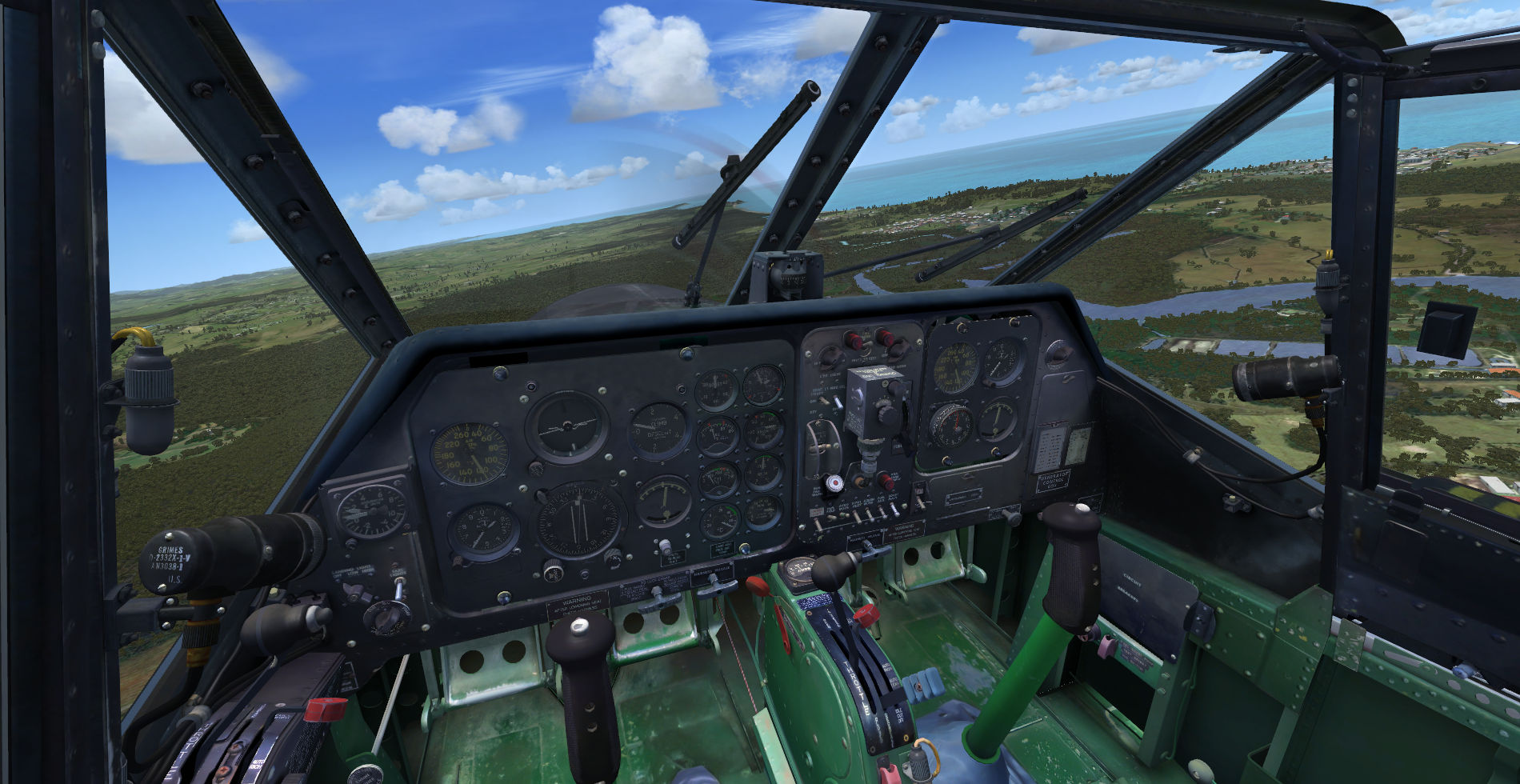 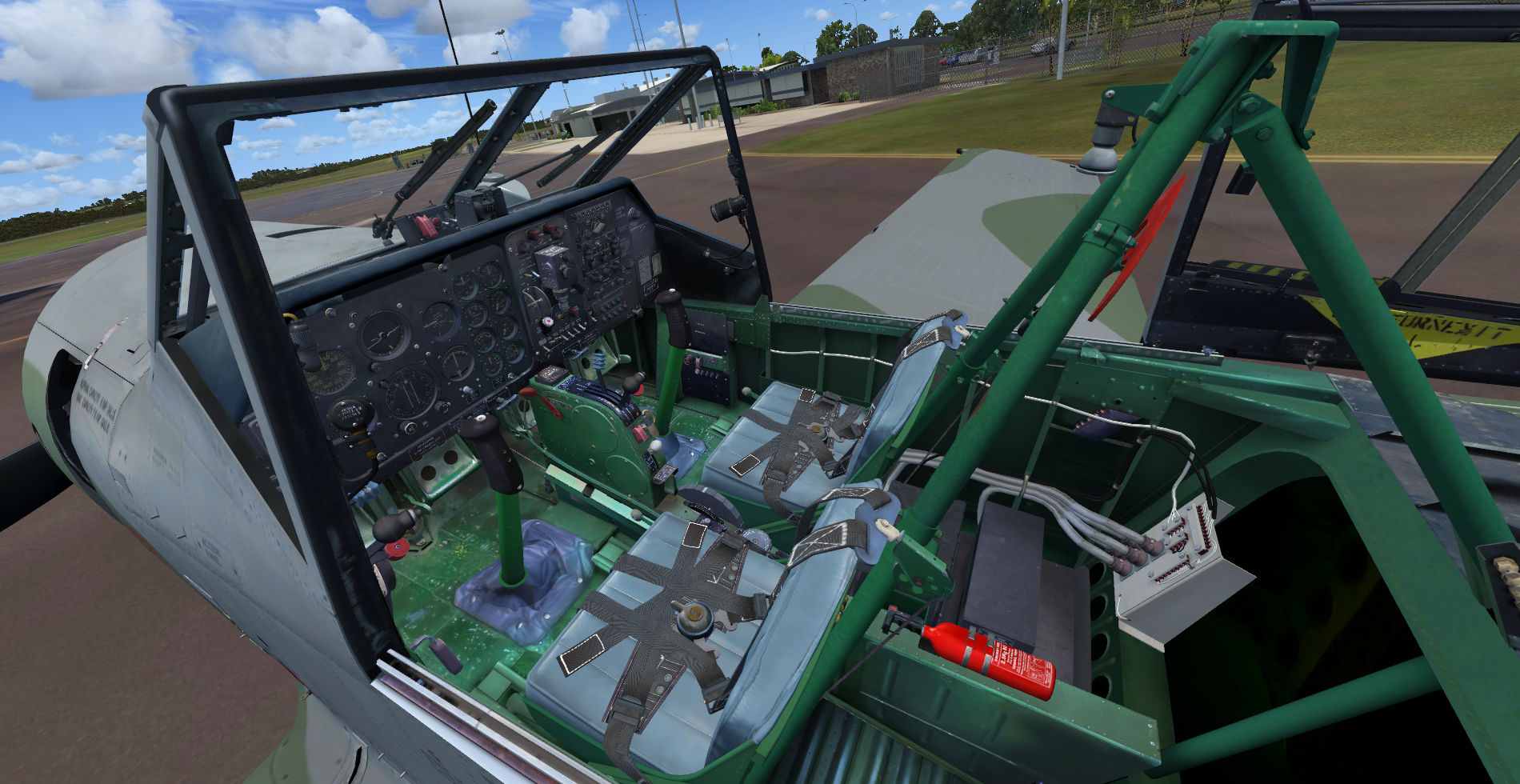 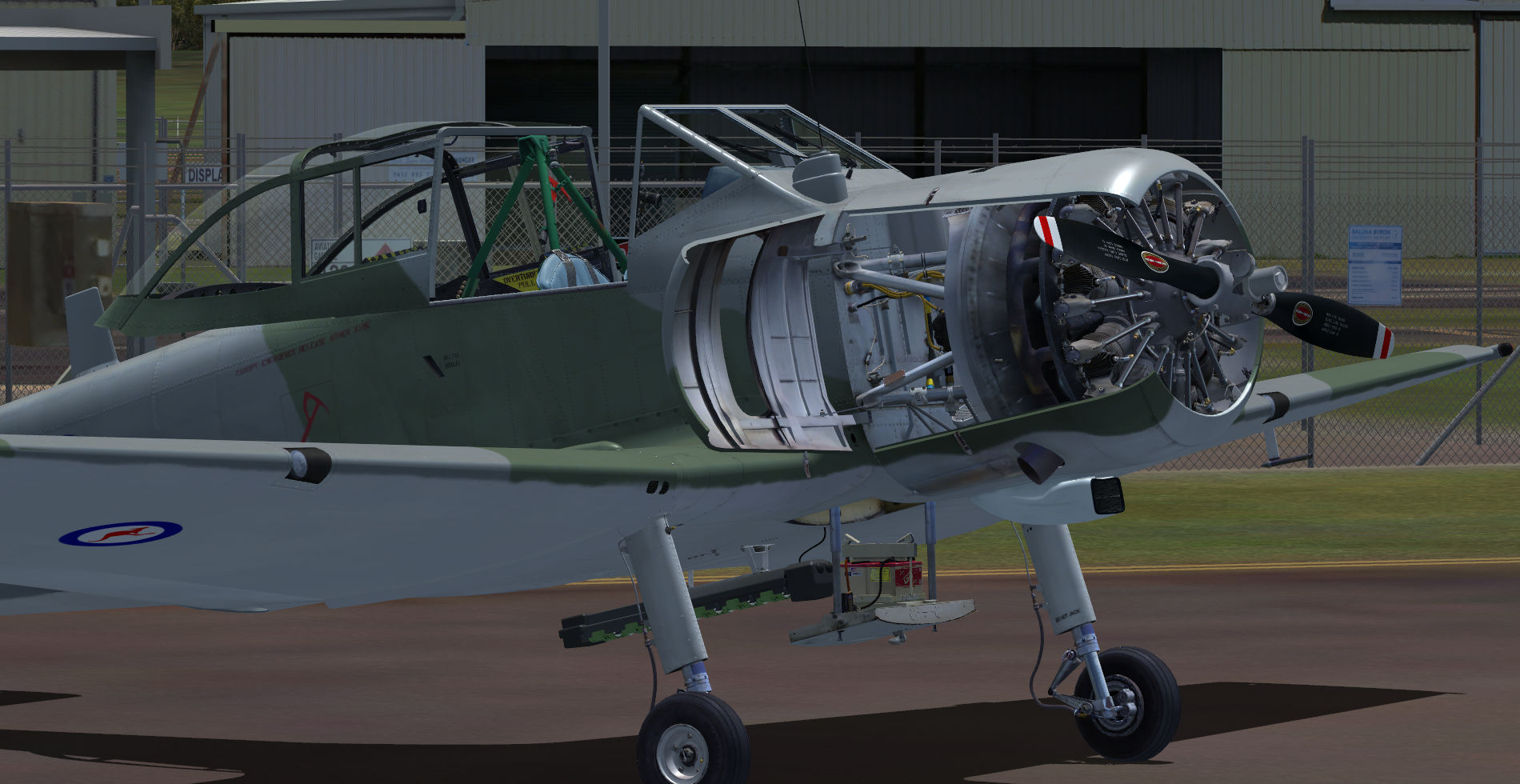 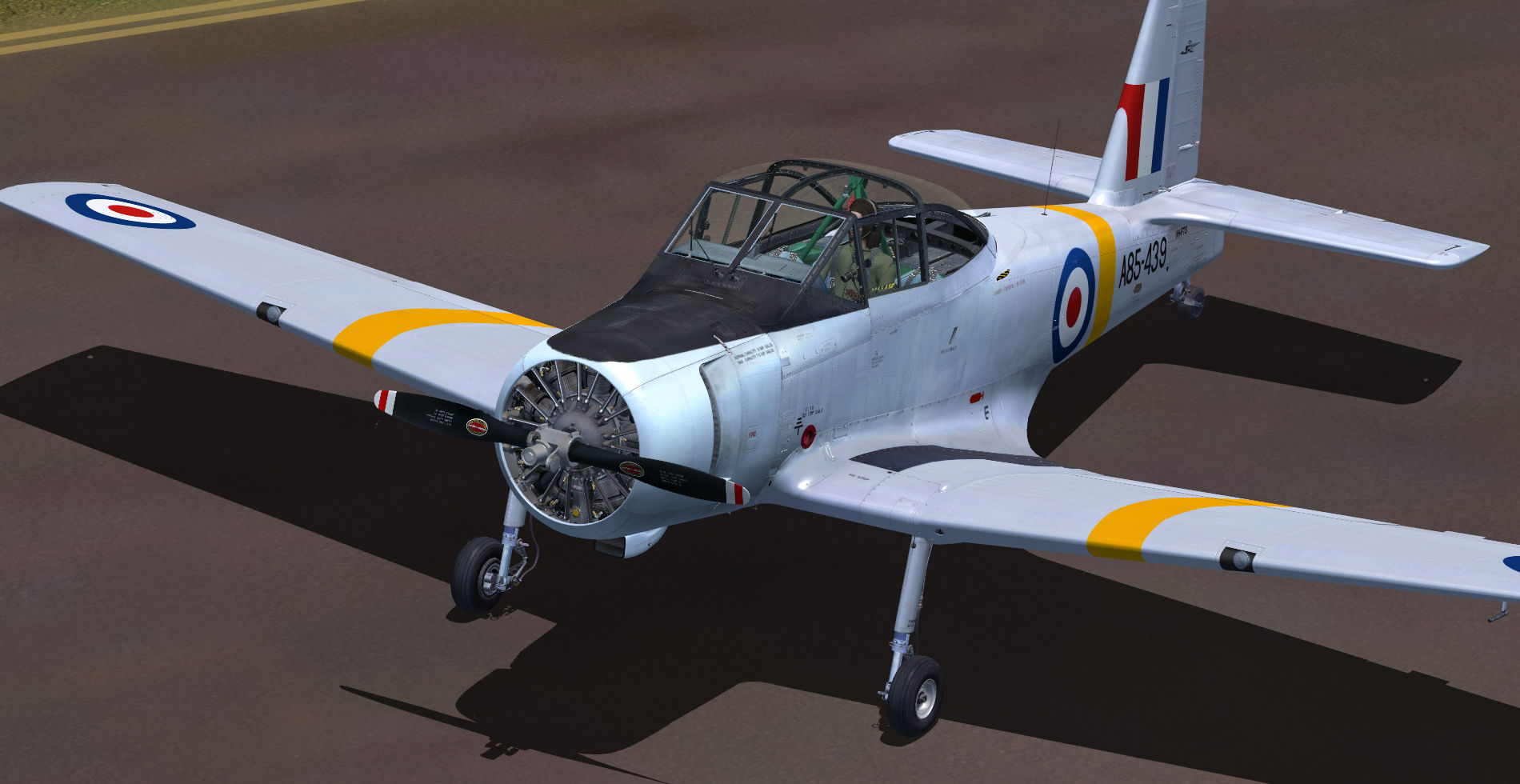 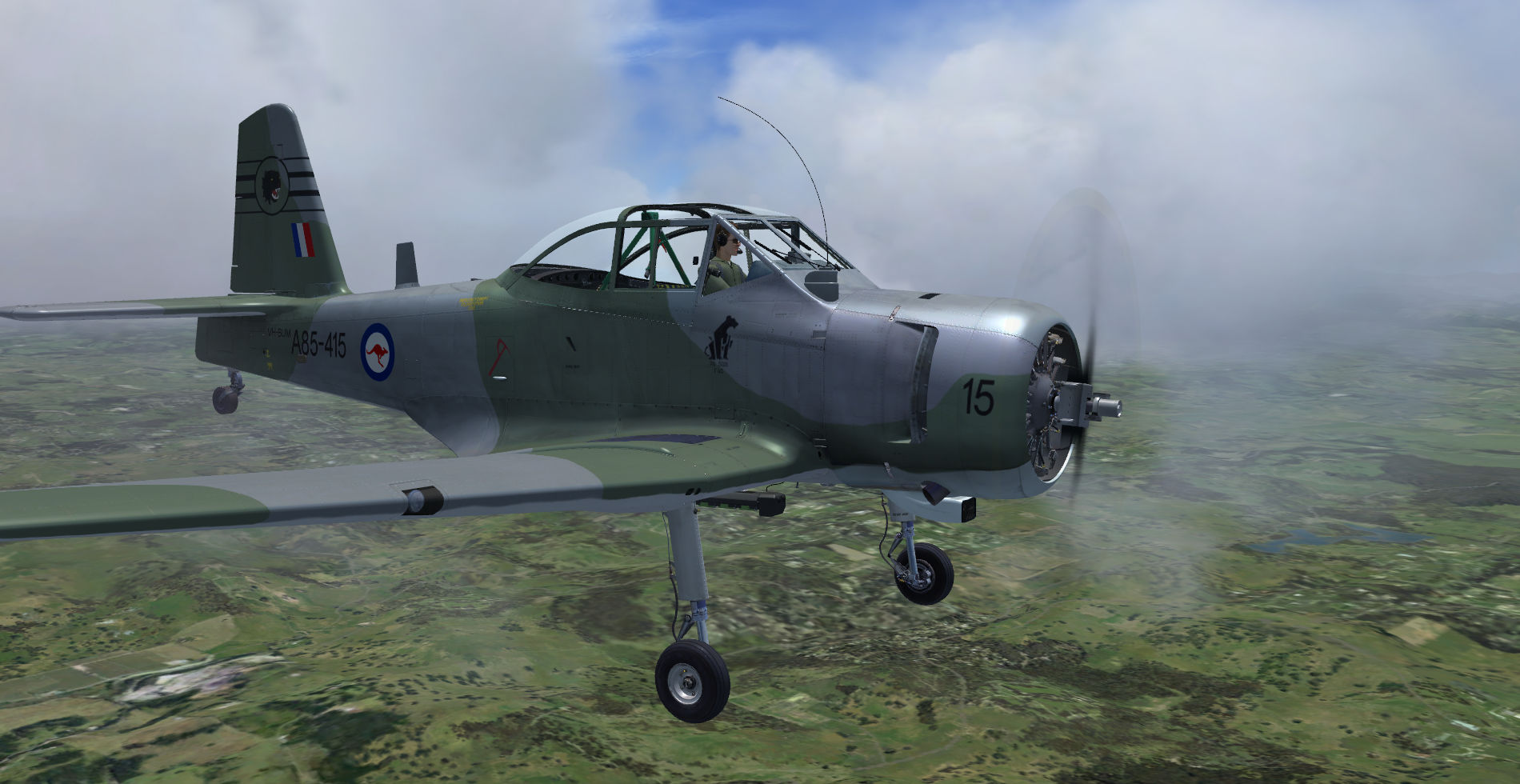 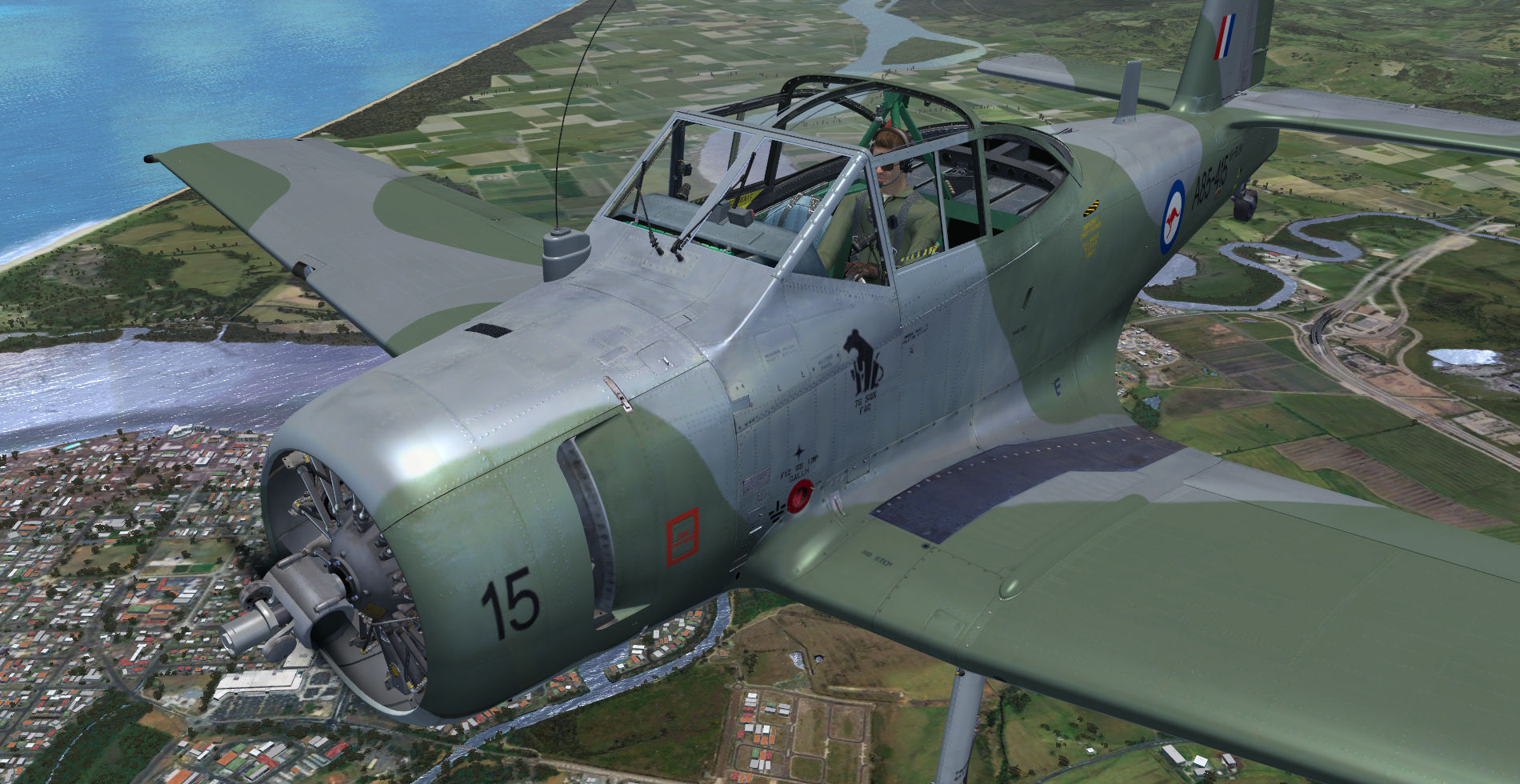 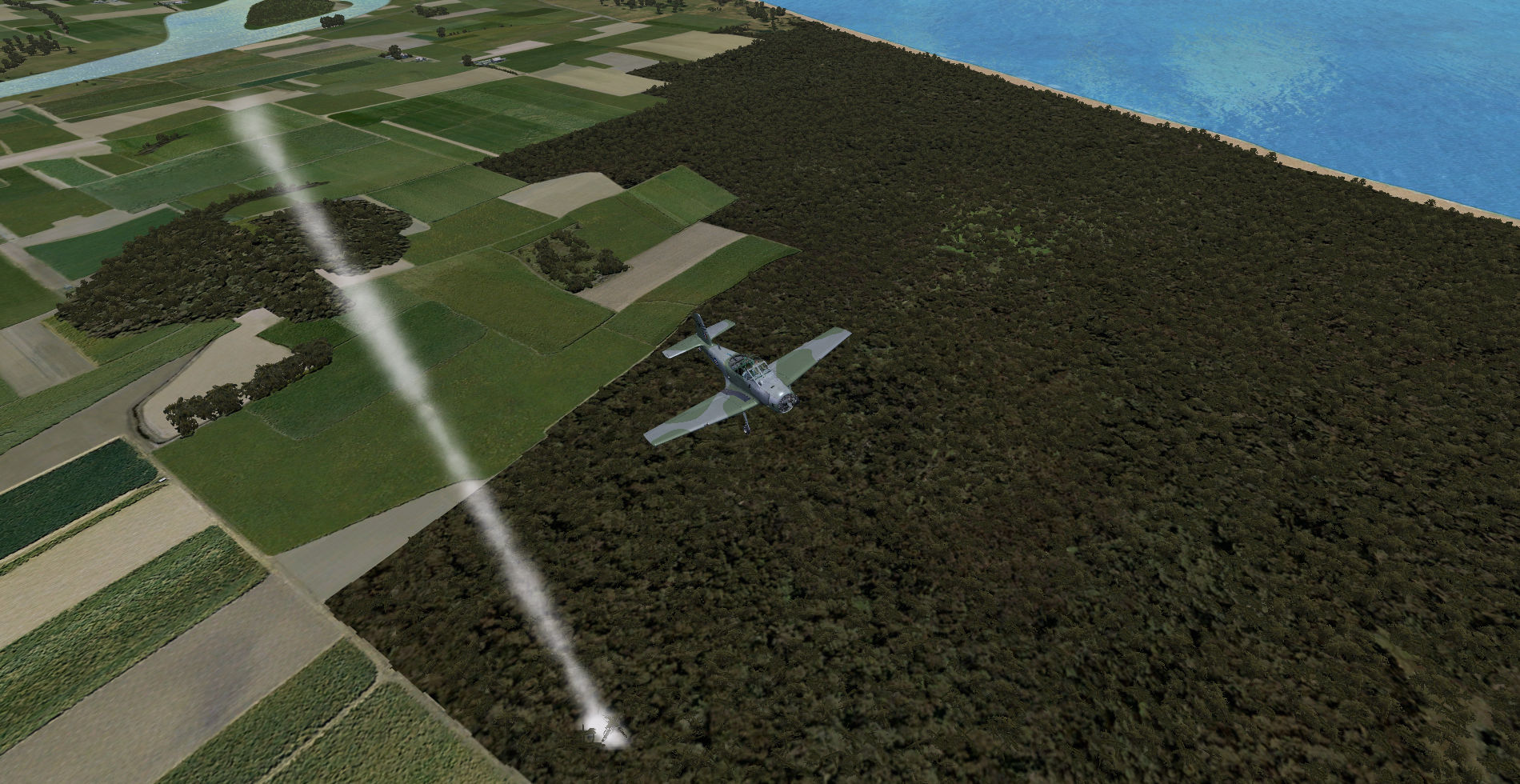